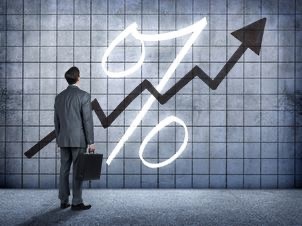 Interest Rates, Inflation, Recession and the US Markets

In the U.S., the Federal Reserve Board (the Fed) is responsible for setting the target interest rate at which banks borrow and lend money to one another (known as the federal funds rate), and this has a ripple effect across the entire economy. While it usually takes at least 12 months for a change in this interest rate to have a widespread economic impact, the stock market's response to a change is often more immediate.

Understanding the relationship between interest rates and the stock market can help investors understand how changes may impact their investments. They can also be better prepared to make better financial decisions. Below, we will examine how interest rates can have an effect on the economy as a whole, the stock and bond markets, inflation, and recessions.

Below is a chart that shows fluctuations in the federal funds rate over the past 40 years:

With every loan, there is some probability that the borrower will not repay the money. To compensate lenders for that risk, there must be a reward: interest. Interest is the amount of money that lenders earn when they make a loan that the borrower repays, and the interest rate is the percentage of the loan amount that the lender charges to lend money.

The existence of interest allows borrowers to spend money immediately, instead of waiting to save the money to make a purchase. The lower the interest rate, the more willing people are to borrow money to make big purchases, such as houses or cars.

When consumers pay less in interest, this gives them more money to spend, which can create a ripple effect of increased spending throughout the economy. Businesses and farmers also benefit from lower interest rates, as it encourages them to make large equipment purchases due to the low cost of borrowing. This creates a situation where output and productivity increase.

When comparing the average dividend yield on a blue-chip stock to the interest rate on a certificate of deposit (CD) or the yield on a U.S. Treasury bond (T-bonds), investors will often choose the option that provides the highest rate of return. The current federal funds rate tends to determine how investors will invest their money, as the returns on both CDs and T-bonds are affected by this rate.

The Effect of Interest Rates on Inflation and Recessions

These changes can affect both inflation and recessions. Inflation refers to the rise in the price of goods and services over time. It is the result of a strong and healthy economy; however, if inflation is left unchecked, it can lead to a significant loss of purchasing power.

Important
The federal funds rate influences the prime rate, which is the base rate from which other interest rates are determined, such as mortgage rates and the rates on personal loans.

Because higher interest rates mean higher borrowing costs, people will eventually start spending less. The demand for goods and services will then drop, which will cause inflation to fall.

A good example of this occurred between 1980 and 1981. Inflation was at 14% and the Fed raised interest rates to 19%. This caused a severe recession, but it did put an end to the spiraling inflation that the country was seeing.

How Interest Rates Affect the U.S. Stock and Bond Markets

When interest rates rise, it also makes it more expensive for companies to raise capital. They will have to pay higher interest rates on the bonds they issue, for example. Making it more costly to raise capital could put a damper on future growth prospects as well as near-term earnings. The result could be a revision downward in profit expectations going forward as rates increase.

If a company is seen as cutting back on its growth or is less profitable—either through higher debt expenses or less revenue—the estimated amount of future cash flows will drop. All else being equal, this will lower the price of the company's stock. If enough companies experience declines in their stock prices, the whole market, or the key indexes many people equate with the market—the Dow Jones Industrial Average, S&P 500, etc.—will go down. With a lowered expectation in the growth and future cash flows of a company, investors will not get as much growth from stock price appreciation. This can make stock ownership less desirable. Furthermore, investing in equities can be viewed as too risky when compared to other investments.

However, some sectors stand to benefit from interest rate hikes. One sector that tends to benefit the most is the financial industry. Banks, brokerages, mortgage companies, and insurance companies' earnings often increase—as interest rates move higher—because they can charge more for lending.

The reason for this is actually quite straightforward. Say a bond with a $1,000 face value pays 5% interest annually ($50 per year) at a fixed interest rate. It is issued when prevailing interest rates are also 5%. Say that a year later, interest rates rise to 10%. A bond investor could now buy a new bond for $1,000 and be paid $100 per year for holding it. This means that the old bond, which pays only $50 per year, has to be worth less - so the only way somebody would buy the 5% bond would be at a discount in the market. Now say interest rates instead fall to 1%. A new bond purchased for $1,000 would only pay $10 per year to bondholders. The old one that pays $50 is now very attractive, and the market will bid this up so that it trades at a premium in the market.

Fast Fact
The sensitivity of a bond's price to interest rate changes is known as "duration." The longer the maturity of the bond, the more it will fluctuate in relation to interest rates.

One way that governments and businesses raise money is through the sale of bonds. As interest rates move up, the cost of borrowing becomes more expensive. This means that demand for lower-yield bonds will drop, causing their price to drop.

As interest rates fall, it becomes easier to borrow money, and many companies will issue new bonds to finance expansion. This will cause the demand for higher-yielding bonds to increase, forcing bond prices higher. Issuers of callable bonds may choose to refinance by calling their existing bonds so they can lock in a lower interest rate.

For income-oriented investors, a reduction in the federal funds rate means a decreased opportunity to make money from interest. Newly-issued treasuries and annuities won't pay as much. A decrease in interest rates will prompt investors to move money from the bond market to the equity market. The influx of new capital instead can cause the equity markets to rise.

The Effect of Expectations

But, nothing has to actually happen to consumers or companies for the stock market to react to perceived interest-rate changes. Even before the Federal Reserve announces a hike, both businesses and consumers may pre-empt this potentiality and cut back on spending. This can cause earnings to fall and stock prices to drop, and the market may tumble in anticipation. On the other hand, if people expect that the Federal Reserve will instead announce a rate cut, the assumption is consumers and businesses will increase spending and investment. This can cause stock prices to rise.

What Happens to Markets When Interest Rates Rise?

When interest rates fall, the opposite effects tend to happen.

How Do Interest Rates Affect Inflation?

How Do Interest Rates Affect Stocks?

In general, rising interest rates hurt the performance of stocks. If interest rates rise, that means individuals will see a higher return on their savings. This removes the need for individuals to take on added risk by investing in stocks, resulting in less demand for stocks.

Interest rates affect the economy by influencing stocks, bond interest rates, consumer and business spending, inflation, and recessions; however, it is important to understand that there is generally a 12-month lag in the economy, meaning that it will take at least 12 months for the effects of any increase or decrease in interest rates to be felt.

By adjusting the federal funds rate, the Fed helps keep the economy in balance over the long term. Understanding the relationship between interest rates and the U.S. economy will allow investors to understand the big picture and make better investment decisions.

Investopedia requires writers to use primary sources to support their work. These include white papers, government data, original reporting, and interviews with industry experts. We also reference original research from other reputable publishers where appropriate. You can learn more about the standards we follow in producing accurate, unbiased content in our editorial policy.