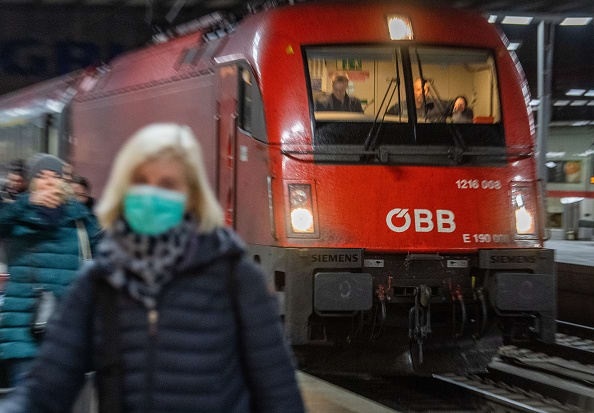 On Monday, the Dow Jones Industrial Average, the S&P 500and the Nasdaq Composite all fell sharply.

Don’t hit the panic button just yet. Within six months, stocks are usually on the mend from the fallout of disease outbreaks such as the coronavirus, say experts.

These declines aren’t the first caused by the respiratory illness that was initially reported in Wuhan, China, in late December, and has since infected more than 79,000 people. Economist Patrick Perret-Green said late last month that the outbreak threatened a “Lehman-type moment” but then stocks rebounded by early February.

“They recovered all of those losses – and then some,” said Jeffrey Kleintop, chief global investment strategist at Charles Schwab.

Kleintop compiled research recently on how long stocks felt the pain of endemics and pandemics. Not too long, it turns out. 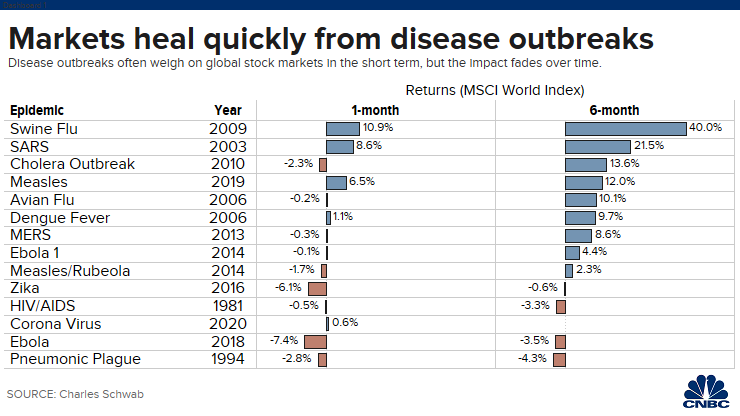 Stocks were down 2% in the immediate wake of a 2010 cholera outbreak, which eventually sickened more than 6% of Haitians.

Six months later? They were up more than 13%.

In 2016, the Zika virus, linked to birth defects in the babies of mothers infected while pregnant, tore through Latin America, the Caribbean and the U.S. The global stock market shed 6% a month after Zika took off. But six months later? It was down just around 0.6%.

The deadly Ebola virus that broke out two years later dragged global stocks down more than 7%. Just half a year later, much of that decline had been reversed, too. 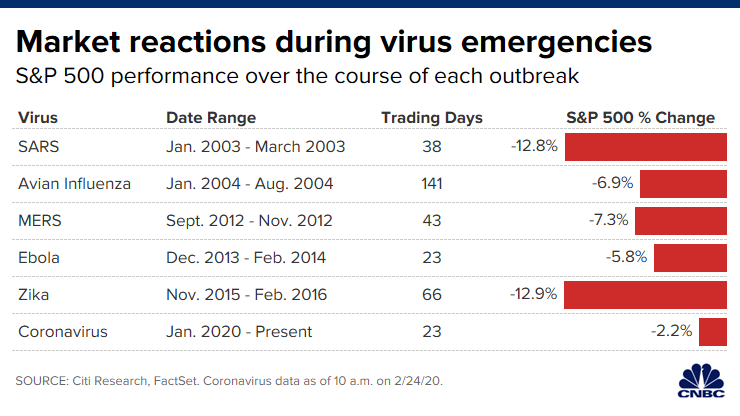 Some patterns of the past are harder to learn from.

As cases of swine flu rose in 2009, so did stocks.The coronavirus has triggered similarly nonsensical market movements. One day, investor responses are diagnosed as overblown, the next, muted.

“Ignore the noise in the short-term,” said Steve Wendel, head of behavioral science at Morningstar.

And turn your attention to your own financial goals.

More from Personal Finance:
One in 5 fear they’ll owe the IRS money this spring
Here’s why getting a raise can actually hurt your retirement
How to buy a house despite student debt

“The people who actually come out of this the best are the people who think about things in the context of their own plan, not in terms of trying to predict the trends,” Egan said.

To be sure, staying calm amid a disease outbreak is not easy.

“It’s a topic that feels closer to home and therefore has a more dramatic response in the market,” Egan said. And of course, as the disclaimers remind us, past performance is no guarantee of future results.

Nevertheless, it’s good to know we’ve been here before and come out ahead.